A Special Laine Memory with ‘Jack’

A Special Laine Memory with ‘Jack’

This month, March 30th, marks the 108th birthday of the great Frankie Laine! It was fun to help him and other fans from all over the world celebrate his past birthdays, every five years, during the Frankie Laine “Birthday Bash.” I attended his 80th, 85th, and 90th.

I have a special memory that happened the first year I conducted my Remembering Frankie Laine presentation in 2013.

I produced and hosted my program for three consecutive years. My Laine program was intended for baby boomers and senior citizens.

Each presentation was for two hours. During this time, I played Frankie’s music, showed video clips from movies and television, and talked about my Laine associations. I also brought memorabilia from Frankie’s vast career to view—old records, autographed albums, pictures, and movie posters.

In the beginning, my presentation almost didn’t happen. The Senior College of Greater Des Moines (I live in Des Moines, Iowa) reserved a spot on their program for my production. However, the reservations were not coming forth. College officials informed me that if I didn’t have at least seven people sign up, it would be cancelled.

Desperate to make sure my pilot Remembering Frankie Laine presentation would not fail, I turned to the print media. In September 2013, a wonderful article appeared in the Des Moines Register, based on an interview I had conducted with writer Kyle Munson. The publication worked, and I garnered over 10 participants for my first presentation that October. The article, “Any Fans of Vocalist Laine Need to Sing Out,” was a wonderfully written piece.

Shortly after this piece hit the newsstands, Kyle sent me an email he had received from a gentleman who mistakenly thought that Kyle was hosting the Laine event:

My daughter sent me the address of the website about you looking for Frankie Laine fans. I’m a 90-year-old WW II veteran that’s married to a walker. Due to years of arthritis, broken hip, hip replacement, and fractured pelvis. I used to do pretty well with a cane, but it’s getting harder. I have no idea where this place is that you will be having this class about Frankie, not sure I could even get to it. But I’ve been a Laine fan for years – Mule Train, I think was a favorite along with Jezebel. If you care to contact me I would listen, not sure I’d be able to attend your class. I live in an Asst./Living . . . Jack

I have an immense respect for veterans—especially those who served during World War II. Immediately, I contacted this man—Jack Heyn.

Unfortunately, Jack was not able to attend my Laine program. This 90-year-old gentleman needed to use a walker to get around. But he was truly a Frankie Laine fan. I wondered what I could do to share my collection and program materials with Jack. Then I came up with an idea. I would offer to go to his place and personally deliver Frankie Laine to him! Jack was overwhelmed! He readily invited me.

I set a date and time with Jack and met him at his humble apartment—stepping into a world that left me enthralled.

Jack had been a professional photographer. During the war, he enlisted in the United States Army Air Corps. three months later with interest in its photography school. He received basic training at Jefferson Barracks Military Post in Lemay, Missouri. After basic training, he was assigned to the headquarters of 3rd Bombardment Group (L) at Savannah Army Air Base in Savannah, Georgia, and was told that there might be an opening at the photography school in January 1942.

When the United States was attacked by the Japanese, Jack was visiting his sister and childhood friend in the capital city of Washington, D.C. He was standing on the steps of the Capitol when President Franklin Roosevelt requested the Congress to declare war.

Jack rotated back to the United States in March 1945. After the war, he attended a six-month course at a photography school in New York City. He and his wife Evelyn “Jonnie,” then took residences in New Jersey; Pennsylvania; Des Moines, Iowa; Denver, Colorado; and back to Des Moines once again.

Jack had a photography business in Des Moines for about 30 years, specializing in weddings and commercial work.

Jack showed me a scrapbook of his World War II photographs. One that particularly interested me was a picture he had taken of famed actor Gary Cooper standing in front of a B-15 bomber airplane in 1943. He loved talking about these days. He also lovingly spoke about his wife, Jonnie, whom he had recently lost. I was entranced that this veteran and photographer was sharing his life with me. I will always remember how young and dashing he was during the war. I was reminded, seeing this elderly, crippled man, what Father Time does to all of us who are fortunate enough to grow old.

Jack loved my specialized DVDs of Frankie Laine’s material. This private presentation I gave to him made him extremely happy. I had so much respect for this man! He didn’t realize it, but he was giving great joy to me, as well!

Of course, Jack got out his camera and took various photographs of me during our time together. I truly wish that, for a moment, we had had someone else there to snap a photo of the two of us together. What a treasure that would have been for me.

I presented a copy of my book Reaching for a Star to Jack. He asked that I sign it, which I did. Jack took a photograph of me signing.

I enjoyed my visit with Jack as much as he did. I love presenting Laine material to someone who I know is truly appreciative. Jack was that and more. He made me feel welcome in his world. He loved speaking about his youth and his beloved Jonnie. I could tell that he was preparing for the day he would be with her again.

My decision to come directly to Jack, so that he could enjoy my Laine material, has been one of my most treasured Laine memories. I am so blessed that this wonderful man entered into my life for a brief time—one more unforgettable event in my life because of my association with Frankie Laine. Indirectly because of Frankie—yes, but because of Frankie, nonetheless.

Jack sent me an email after our visit:

I surely did enjoy the evening and looking forward to another session, but don’t want to take advantage of you. I thank you for taking the time to spend with me tonight.

A few years later, on June 22, 2017, Jack Heyn died. Perhaps he has met Frankie in heaven. Who knows? Of this, though, I am certain: Jack is now with his beloved Jonnie. 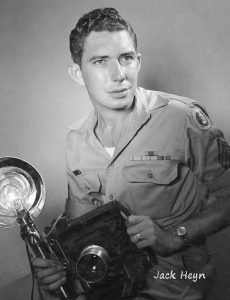 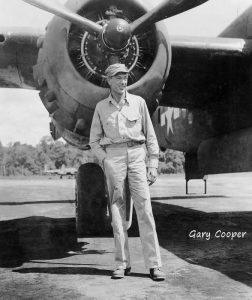 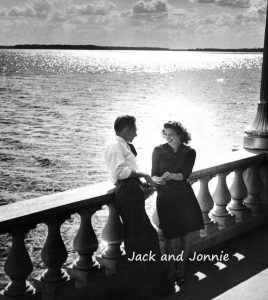 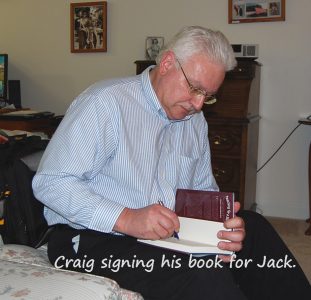 About the Author: Craig Cronbaugh